Building the tallest structures, the saying goes, begins with the base. To Prof Li Zongjin, chair professor at the University of Macau’s (UM) Institute of Applied Physics and Materials Engineering (IAPME) and winner earlier this year of the Arthur R Anderson Medal from the American Concrete Institute, the base is basically composed of an important material—concrete.

The Arthur R Anderson Medal recognizes Prof Li for his triple global contributions to infrastructure, teaching, and research. The first Chinese scientist to be so honoured since the award was established 45 years ago, this preeminent concrete expert is admired by peers and inspires the younger generation. His humble beginnings saw him toil as a brickmaker and farm hand. How did he then reinvent himself to become a world-class scientist? The ‘secret’ to his success is simple yet prosaic: ‘I merely work when other people are drinking coffee.’ 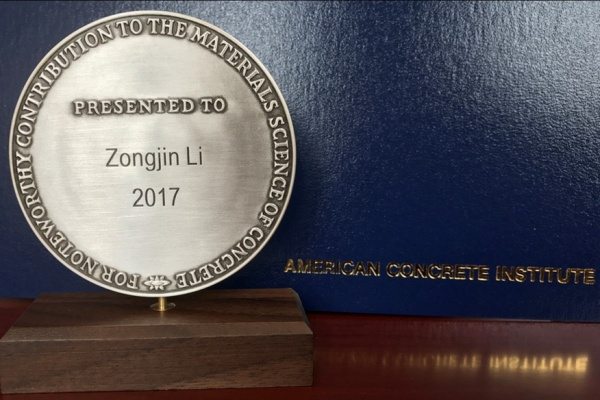 When Li was in middle school, a cataclysmic event turned China upside down and upended millions of lives across the country. That defining event is the Cultural Revolution. His formal education ended prematurely, Li was forced to fend for himself; he was first thrust for two and a half years into a demanding job as a farmer, and then moved into a brickmaking factory that belonged to an iron mine. But somehow, he turned this adversity into advantage; it marked the beginning of his self-education. Li was inspired by China’s iconic writer Lu Xun, who, when told he was a genius, famously replied, ‘There is no such thing as a genius. I merely work when others are drinking coffee’. He devoted all his precious hours after a gruelling day’s work in the mine to reading borrowed books, while his co-workers busied themselves playing poker. ‘If you aspire to achievement, you must work harder than others. Only then can you seize the opportunities when they present themselves,’ he says. 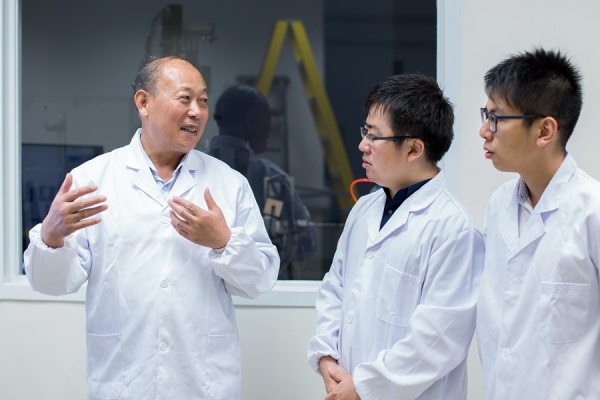 An opportunity eventually came knocking, and seize it he did. In 1977, the National College Entrance Exam was reinstated in China. Having never stopped his self-education during the wilderness years, Li now had a clear, reachable goal in mind—entering college and making up for lost time. During those difficult years, he developed the habit of collecting and internalising famous sayings by famous people. When he received a life-changing offer from Zhejiang University the following year, he was moved to quote one of his favourite aphorisms: ‘Hard work makes a beautiful life possible.’

Foreseeing the Potential in Concrete Research

The hardships Li endured in his youth cultivated his perseverance and resilience. Whether at Zhejiang University or Northwestern University in the United States, Li was always the most hardworking student. During those days, he made an important discovery that would later shape his career trajectory. He noticed that concrete was the most widely-used building material in the world, and yet nobody seemed to realise the importance of research in the field. ‘The per capita consumption of concrete is at least 2,500 to 3,000 kilograms a year worldwide, which is more than the per capital annual consumption of grains,’ he says. ‘But because concrete is easy to get, it is rarely treated with the importance it deserves.’ Foreseeing great potential in concrete research, Li began to study ways to improve the performance of concrete at a lower cost. According to Li, scientists have a far better understanding of metal materials than concrete, because concrete is a composite material that is structurally more complicated than metals. 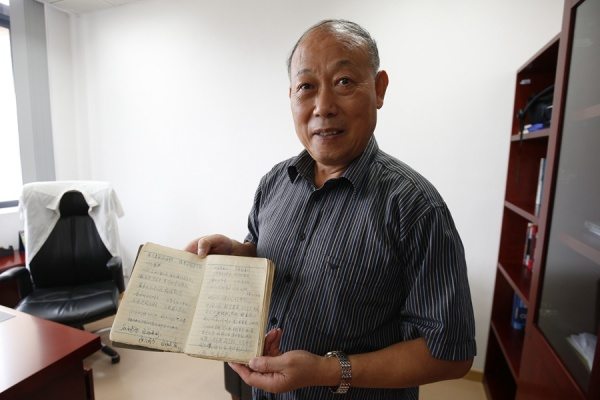 Prof Li has kept this notebook for many years. He liked to collect famous quotes in his youth for self-motivation.

In 2009, Li was appointed by the Ministry of Science and Technology of China as the sole chief scientist for a concrete research project under the national 973 programme. He was given a challenging task: developing a modern version of concrete that is environmentally friendly but also more flexible and durable.

He and his team rose to the challenge and successfully developed a new technology, which has been used in numerous construction projects in China, including the high speed railway track between Beijing and Shanghai, Tianwan Nuclear Power Plant, and the Taizhou and Chongqi Bridges.

Having devoted half his life to concrete research, Prof Li says that one distinguishing feature of concrete is the great variance in the scale of measurement. ‘To understand the structure of steel or iron, normally all you have to do is observe the atomic structure, but when it comes to concrete, the variance in the scale of measurement is so great. We are talking about ten to the 14th power, from observing the products from concrete hydration using nano technology to monitoring bridges of several kilometres,’ he says. ‘By understanding products generated from concrete hydration using nano science, we can improve the micro-structure of concrete by artificially adding organic or inorganic nano-particles to make their macro-performance comply with our requirements, such as increasing a structure’s flexural strength or toughness.’ 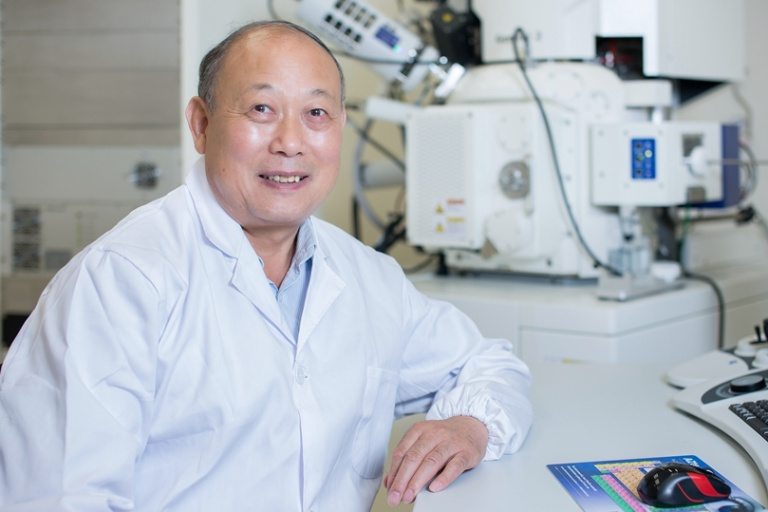 Currently, Prof Li is working with assistant professor Sun Guoxing from the IAPME and they have achieved some encouraging results. For example, by adding 5-nm inorganic particles in organic hydrogels, they successfully developed hydrogels with the best all-round performance in the world. Also, by adding organic or inorganic particles in concrete, they successfully increased the flexural strength of concrete by three times without lowering the compressive strength.

Prof Li credits his accomplishments in concrete research to the guidance of Prof S P Shah, his master’s and PhD supervisor while he was studying at Northwestern University in the US. Prof Shah opened Li’s eyes to what could be achieved with cross-disciplinary collaboration. ‘When I was in the US, I noticed that students involved in concrete research were not just from the civil engineering department; some of them also came from other departments, such as chemistry, physics, and materials engineering,’ he says. ‘Having members from different backgrounds could help the team approach the subject of research from different angles, with different kinds of expertise. Later, when I was trying to establish my own team, I adopted this cross-disciplinary approach.’

Li also adopts the cross-disciplinary approach when recruiting students. ‘We would look at the overlaps between different disciplines,’ he says. ‘We used to say that the inside knowledge of a discipline is like Greek to outsiders. But now we try to bring people from different disciplines together so they can exchange ideas based on their own expertise, and the results have been very good.’ He cites an example to illustrate his point. Earlier, his team needed to develop a piece of software to better control the experiment equipment, which would have been very difficult for civil engineering students. But with the help of students from the electronic engineering department, they developed the software in a very short time, which expedited the progress of the research study with good results. ‘ If we only study concrete from the perspective of civil engineering or materials engineering, we would be limiting the applications of concrete. Cross-disciplinary collaboration, on the other hand, opens our mind and lets us see all kinds of possibilities,’ he says.

Prof Li has worked at the Hong Kong University of Science and Technology (HKUST) for 22 years. Formerly the associate dean of the School of Engineering at HKUST, he is currently a chair professor in the IAPME at UM. ‘UM’s rapid progress in recent years has attracted experts and scholars from around the world, which is similar to what happened to HKUST when I first joined it. So I saw the great potential of UM, and decided to come here.’

Currently, Prof Li is working on a cross-disciplinary research project: a new type of wind turbine which he hopes can be set up on the UM campus. ‘Macao is blessed with excellent wind resources, and I hope to take full advantage of the resources to develop a new type of wind turbine for the new campus,’ he says. His team is working to develop a 1000-watt floating wind turbine, with a blade-to-blade distance of 3.2 metres. Unlike the old-fashioned tower-based wind turbines, the floating wind turbine was designed based on the Archimedes Law, with the buoyancy of the liquid supporting the vertical load of the wind turbine. To put it simply, it is like placing the wind turbine on the surface of the water to reduce the resistance from the turning of the blades as well as the wear and tear of the parts. What’s more, the blades can be made from concrete. 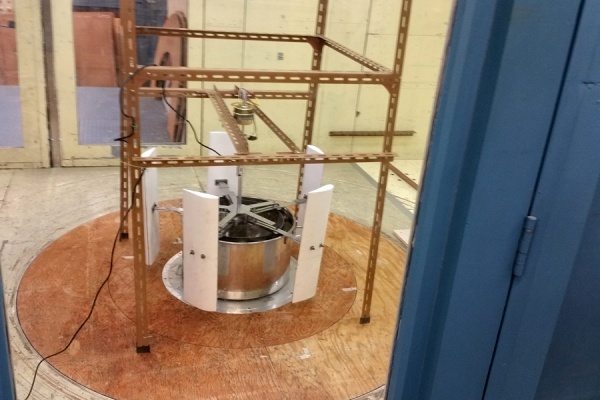 A model of the floating wind turbine

If successful, the wind turbine will be able to generate between 4,000 and 5,000 kilowatt hours of electricity every year, enough to satisfy the need of a small office. Speaking of future research plans, Prof Li says excitedly, ‘We hope to attract investments from businesses and give our students an opportunity to deepen their research and develop a large-sized wind turbine that can generate more power.’ 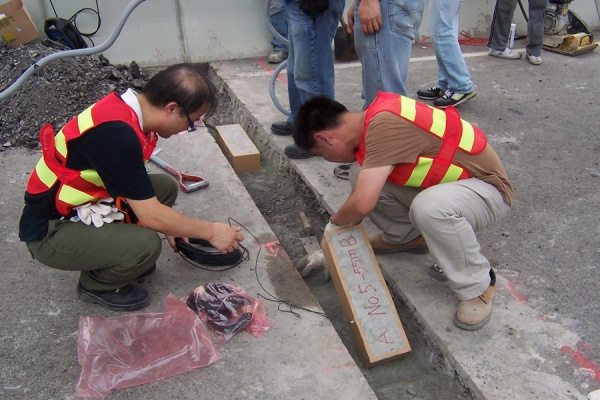 The cement-based piezoelectric sensors can be used to monitor traffic flow, vehicle speed, and vehicle weight

Contributing to the Development of a Smart City with New Research

To support the Macao SAR government’s goal to develop Macao into a smart city, UM is preparing for the establishment of a third state key laboratory for big data research. Prof Li is part of the team. He and his colleagues are now studying the application of cement-based piezoelectric sensors in traffic control. ‘It is similar to the touchscreen of a mobile phone,’ he says. ‘The idea is that when a vehicle passes through a road installed with cement-based piezoelectric sensors, it would generate electric charges on the surface of the sensors. By collecting the data, we could calculate the traffic flow, vehicle speed, and vehicle weight. If we consolidate these data and establish an internet of things, we would be able to realize real-time traffic monitoring, thus contributing to creating a smart city in Macao.’