On 18th December, Dr. Zhenyu Yang from University of Toronto, Canada gave an invited talk on his recent achievements on quantum dots (QDs)/metal-halide perovskite hybrid systems for optoelectronic applications. Firstly, Dr. Yang provided a short background of semiconductor QDs and metal-halide perovskites. Secondly, he illustrated his recent discoveries in the formation of quantum dot/perovskite hybrid materials. The hybrid systems have shown unique chemical and photophysical properties. The introduction of perovskite passivation onto QD surfaces has been shown to regulate the alignment of QD domains and the crystallization of outer perovskite matrix during the film preparation, yielding the uniform dispersion of QD within a perovskite matrix. Furthermore, he demonstrated the promising light-emitting and photovoltaic applications of these hybrid systems. His report was very interesting and instructive to the audience.

Dr. Zhenyu Yang received the B.Sc. (Chemistry) from Nankai University in 2009 and the Ph.D. in Chemistry from the University of Alberta, under the supervision of Prof. Jonathan Veinot. His Ph.D. research focused on the synthesis and surface chemistry of group 14 nanomaterials (e.g., silicon and germanium). He joined Prof. Edward Sargent’s laboratory at the University of Toronto in July 2014 and currently he is the project manager of the perovskite light emission subteam. His research has been focusing on the development of quantum dot and organo-lead perovskite materials for optoelectronic applications such as light-emitting devices and photovoltaics. He is the co-inventor of 3 patents, and has over 40 peer-reviewed publications, including Nature Photonics, Nature Communications, Journal of the American Chemical Society, Advanced Materials, and Nano Letters. 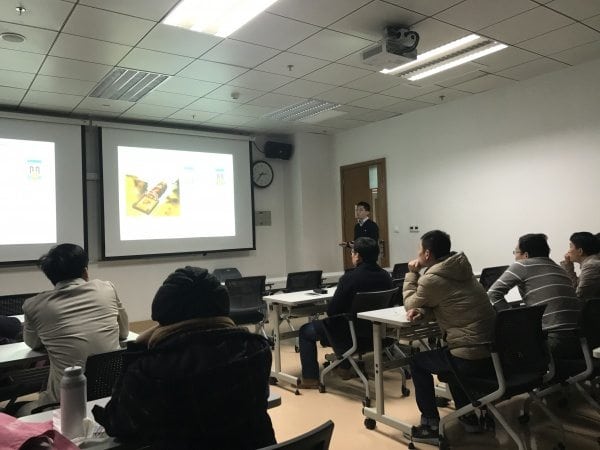 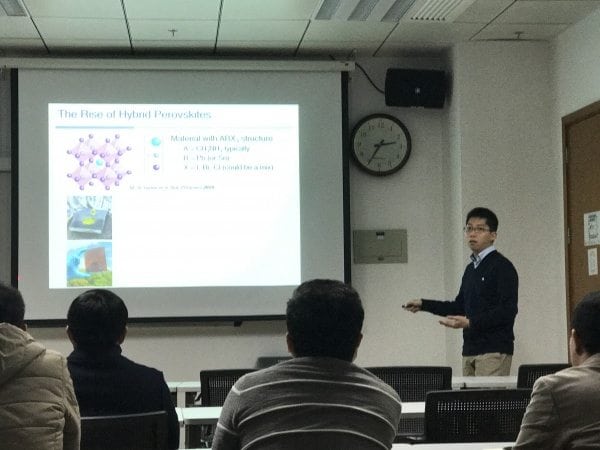