The University of Macau (UM) Institute of Applied Physics and Materials Engineering (IAPME) and Nanjing Tech University jointly developed a method to prepare phase-pure quasi two-dimensional (2D) metal-halide perovskites, which could be used for constructing stable perovskite solar cells. This study has been published in the internationally renowned journal Nature Energy.

Because of their excellent optoelectronic properties and low production cost, metal-halide perovskites have been considered as the most innovative material in light havesting and light emission. However, the very low formation energy of the typically used three-dimensional (3D) perovskites accounts for their low stability and seriously hinders the commercialisation of perovskite optoelectronic devices. Recent studies show that the dimensionality of deposited perovskites could be reduced from 3D to quasi 2D by introducing an appropriate amount of long organic cations into the precursor solution, which can greatly improve the stability of perovskites thanks to the protection offered by the organic cation layer on the surface. Nevertheless, such 2D perovskites typically consist of multiple quantum wells with a random well width distribution because of the thermodynamic stability of compounds in the solution. The thick quantum wells and 3D perovskite within the deposited film will still limit the overall stability of the material. Therefore, the deposition of phase-pure quasi 2D perovskite remains a key scientific challenge.

To address this challenge, Dr Liang Chao in the IAPME, in collaboration with researchers from Nanjing Tech University, has developed a method to prepare phase pure quasi 2D perovskite. They overcame the traditional constrains by probing perovskite crystallisation processes and tailoring the ionic coordination between different components. Based on these phase-pure 2D perovskites, they have successfully constructed solar cells with high stability and efficiency.

The study was completed under the guidance of IAPME Associate Professor Xing Guichuan, as well as Nanjing Tech University professors Huang Wei and Chen Yonghua. Assistant Professor Chen Shi in the IAPME also made important contributions to the study. The project was jointly funded by the Science and Technology Development Fund, Macao SAR (file no: 116/2016/A3, 091/2017/A2, 014/2017/AMJ), University of Macau (file no: MYRG2018-00148-IAPME), and the National Natural Science Foundation of China (file no: 91733302, 61935017). 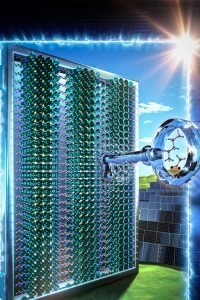