Zhou Bingpu, an assistant professor in the University of Macau (UM) Institute of Applied Physics and Materials Engineering (IAPME), along with his research team, has successfully developed a stretchable, translucent, and durable superhydrophobic film that is cheap, easy to produce, and environmentally friendly, with the potential for large-scale production and applications in many fields such as anti-icing, corrosion protection, bio-sensing, and microfluidics. The study has been published in the internationally renowned journal Advanced Functional Materials.

With the development of wearable sensors, flexible materials, and optoelectronic devices in recent years, flexible antifouling and superhydrophobic substrates that can be stretched and bent have attracted widespread interest. However, achieving a balance between flexibility, superhydrophobicity, and durability is still a challenge for both the scientific community and the related industries. Optical transparency is also of great significance to broader applications of superhydrophobic flexible films for optoelectronic functional devices and human-machine interfaces.

To address this problem, Dr Zhou and his research team proposed a simple, low-cost, and environmentally friendly method to prepare a flexible superhydrophobic film that is translucent and durable, with the potential for large-scale production. The ‘two-step’ preparation technology enables the film to obtain a contact angle of 170° and a rolling-off angle of 2°, with excellent resistance to the impact of droplets with a large initial velocity (such as raindrops) or a water jet. The method the team proposed can ensure tight connection at the interface of the micro and nano-structures, thus realising robustness when the film is exposed to mechanical damage in actual application scenarios. The film can maintain a relatively stable level of superhydrophobicity in a variety of stability tests, including high-power ultrasonic treatment, mechanical deformation such as stretching and bending, chemical corrosion, periodic high pressure, automobile wheel rolling, and sandpaper abrasion.

The study also demonstrated the excellent flexibility, stability, and optical transparency of the as-prepared film as protective films for touch screens and waterproof layers for umbrellas. The cost of producing a film that is five centimetres long and five centimetres wide is roughly USD 0.56, without the need for an expensive and burdensome process, which indicates the potential for large-scale production.

Dai Ziyi and Chen Ge, doctoral students in the IAPME, are the co-first authors of the study. Prof Zhou Bingpu at UM and Prof Lin Jing at Guangzhou University are the corresponding authors. Prof Xu Yi and Prof Li Shunbo at Chongqing University, as well as Ding Sheng, a doctoral student in the IAPME, also made important contribution to the study. The study was funded by the Science and Technology Development Fund, Macao SAR (file number: 0037/2018/A1), UM’s research grant (file number: MYRG2017-00089-FST and MYRG2018-00063-IAPME), and the Key Disciplines Laboratory of Novel Micro-Nano Devices and System Technology at Chongqing University. For more details about the study, please visit https://doi.org/10.1002/adfm.202008574. 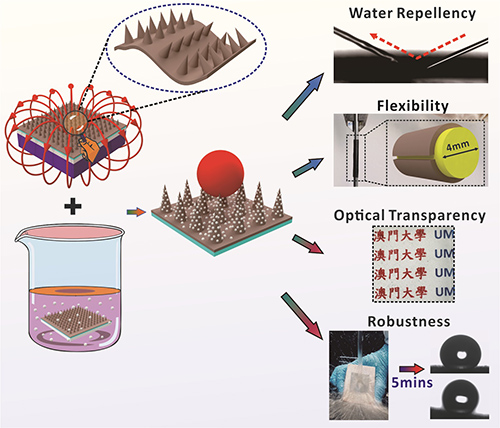 A study that demonstrates the flexibility, durability, optical transparency, and water repellency of the film 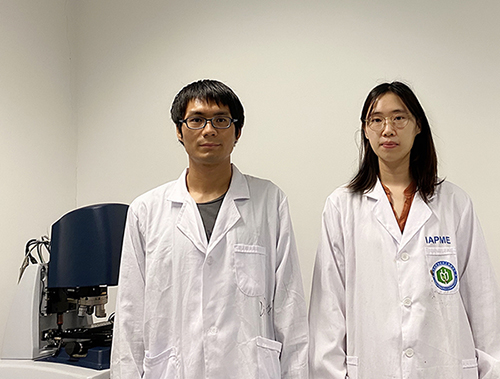