A research team led by Ng Kar Wei and Wang Shuangpeng, two associate professors at the Institute of Applied Physics and Materials Engineering (IAPME) of the University of Macau (UM), has proposed a novel electrochromic battery based on a hybrid aqueous electrolyte, which can help to resolve the problem of the short lifespan of traditional electrochromic devices based on aqueous electrolytes and is expected to enable the commercialisation of low-cost, high-safety aqueous electrochromic batteries. The detailed investigation of the intrinsic mechanism for the superior performance is also expected to provide potential guidance for the design of other high-performance electrochemical devices. The research results have been published in ACS Nano, a leading international journal in the field.

Electrochromic technology is considered a key for realising energy-saving green buildings in the near future. Electrochromism refers to the dynamic and reversible adjustment of the optical properties (such as transmittance, reflectivity and colour) of specially designed nano-films via electrically triggered redox reactions. Smart windows based on this technology can selectively absorb or reflect external heat radiation and prevent internal heat dissipation, thus enabling the effective regulations of indoor room brightness and temperature with very low energy consumption. Since its working principle is similar to that of rechargeable ion batteries, electrochromic devices can serve the purpose of both light regulation and energy storage simultaneously, giving rise to the concept of multifunctional electrochromic battery (ECB). However, most existing ECBs are based on Li-ion organic electrolytes and they exhibit slow response speed and low cycling stability, which limit their commercialisation. Multivalent ion aqueous electrolytes have therefore been recently developed for their better safety and higher conductivity than traditional organic electrolytes. Indeed, notable improvements in response speed and capacity have been demonstrated in aqueous-based ECBs. Nevertheless, owing to the mismatch between the electrochromic nano-films and the aqueous electrolyte, these ECBs can only maintain stable operations in around 1,000 cycles, which is far from meeting the requirement for commercialisation (> 104 stable operation cycles). Therefore, developing a novel architecture with matching electrochromic materials and aqueous electrolytes is crucial for the realisation of practical low-cost, high-performance electrochromic devices. 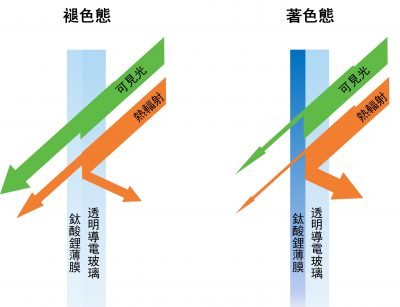 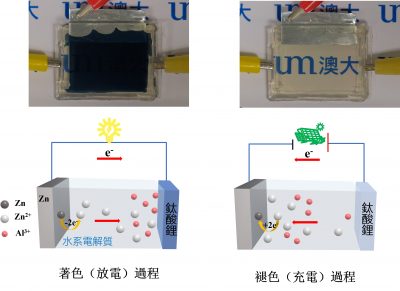 The colouring and bleaching processes of a lithium titanate electrochromic battery and corresponding working principles. The state of energy storage of the device can be visually judged by the change. 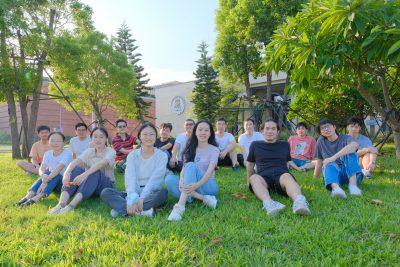